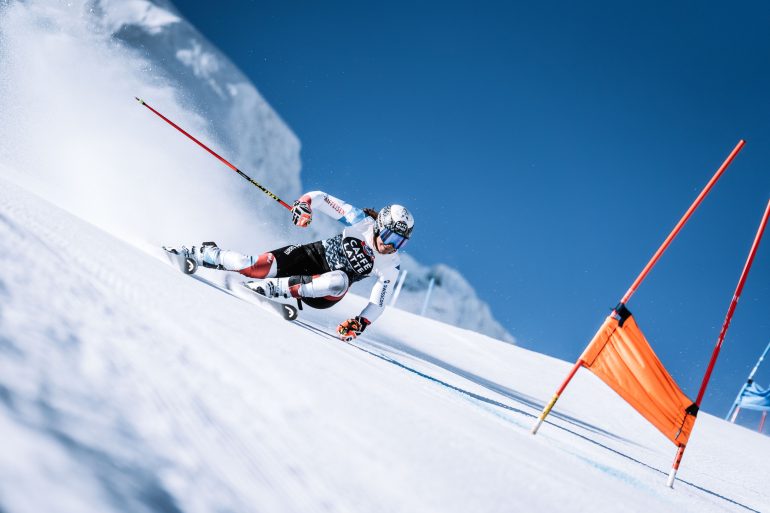 Preparation is the key to success. The path to Olympic gold.

How time flies. The Winter Olympics 2022 in Beijing are already history. For more than two weeks, sometimes even in the early hours of the morning, we have been cheering on our favourite athletes in front of the TV. It’s exactly these athletes who have been concentrating on the Olympic Games significantly longer than their fans. Since last summer, to be precise.
Perfect preparation is essential for a good and successful Olympic season. The path to Olympic glory is not an easy one, particularly during a pandemic. In our blog entry from September ‘The summer before the Winter Olympics’, we asked ourselves how many of the athletes who prepare in Saas-Fee will return to their homelands with one or even several medals.

‘There’s no doubt that many of the athletes training in Saas-Fee again this summer and autumn will come back with medals from Beijing. It’s just a question of how many. We’ll have to wait and see. Blog entry from September

Shortly after the Olympics, we can proudly report that this year 64 medals were won with the help of the training opportunities on our glacier in Saas-Fee.
That’s an impressive 71.1% of all medals that were awarded for disciplines that can be trained for in Saas-Fee!

Since the blog entry in September 2021, it’s no longer a secret why the athletes train in Saas-Fee during this season in particular. Early in the morning on the Saas-Fee glacier from 17th July onwards, athletes can use the ideal snow conditions to prepare themselves for the upcoming winter season. After all, the summer ski region provides 20 kilometres of perfectly maintained slopes for athletes at World Cup level. The fact that slopes and pistes like this are available nowhere else in the world means that Saas-Fee has become the first choice as the training venue for the best athletes. The Saastal Bergbahnen team pays particular attention to the special needs of the many teams, owing to the high demand from all over the world.

Which athletes started their preparation for the Olympics in the summer of 2021 in Saas-Fee, and what are their stories?

Shaun White, the most well-known and successful name in the snowboard scene. The path to his fourth Olympic Games included Saas-Fee where he was able to prepare himself perfectly in the halfpipe discipline. Unfortunately, he didn’t manage another medal this year, but he can look back on an outstanding career. His fellow American, Mikaela Shiffrin, could not display the benefits of her regular training last summer in Saas-Fee as much as she had expected in Beijing. She had to drop out, first in the slalom and then also the giant slalom. But at the age of 26, she still has plenty of time to win all the medals in future Olympics.

Things went significantly better for Max Parrot who has been a welcome guest in Saas-Fee for years. After winning his first medal in the Winter Olympics, he conquered cancer in 2018 and this year he won the gold medal in the snowboard slopestyle final. This was immediately followed by a bronze medal in the halfpipe. Giving up was never an option for Max Parrot. Things turned out in a similar way for the young Swiss athlete Mathilde Gremaud. Mathilde is a welcome guest in Saas-Fee and even has some insider tips for those who are planning a trip to this car-free village. In summer 2020, she was the first woman to achieve a Switch Double Cork 1440 in the snowpark at Saas-Fee. It was exactly this trick that won her a bronze medal in the big air competition. But her time at the Winter Olympics was not over yet. A week after winning the third place, she won the gold medal in the slopestyle.

The snowboarders who prepared for the Olympic Games in Saas-Fee showed huge dominance. Is it purely coincidence that all nine medals were divided among members of the Stomping Grounds Project? Charles Beckinsale and his team construct and maintain the freestyle park and the halfpipe on the glacier in Saas-Fee during the summer. This park offers perfect training conditions for the athletes.

Lindsey Jacobellis won two gold medals in snowboard cross. She had already stood highest on the podium countless times, but this winter she achieved Olympic gold for the first time. Thanks to the training on the crosspiste in Saas-Fee, she not only picked up the gold medal in the women’s competition, but she was also the fastest in the mixed team competition, together with Nick Baumgartner.
There were spirals, flips, grabs and millisecond time differences. The alpine skiers were also in the Saas-Fee glacier ski region during the summer months. Every day they were able to prepare for this Olympic season on 20 kilometres of perfectly prepared slopes. Sometimes the athletes also set off for Mittelallalin when it was still dark, to profit from the icy slopes. Early in the morning, these conditions are very similar to those on the many World Cup slopes of this world.

Saas-Fee also achieved huge media coverage, owing to the presence of numerous top athletes. Major agencies, companies and news services followed the events on the glacier above Saas-Fee. Some used the opportunity to photograph their brand ambassadors for new advertising films. Numerous new advertising spots or photos were shot this summer at 3,500 metres above sea level. Even the New York Times paid a visit in the autumn. The newspaper accompanied the athletes and asked them how they dealt with the topic of fear in their sport. You can find more about this topic here.

Now, shortly after the Winter Olympics in Beijing, all that remains is for us to congratulate all participants. Some of them were able to fulfil their lifelong dream of winning a medal, while others were able to gain valuable experience and impressions.

The countdown to the next preparation time in the forthcoming summer has already begun. This means that the newly minted winners will hopefully soon be with us again in the training camps. Who knows, perhaps one or other of them will even have an Olympic medal in their luggage?