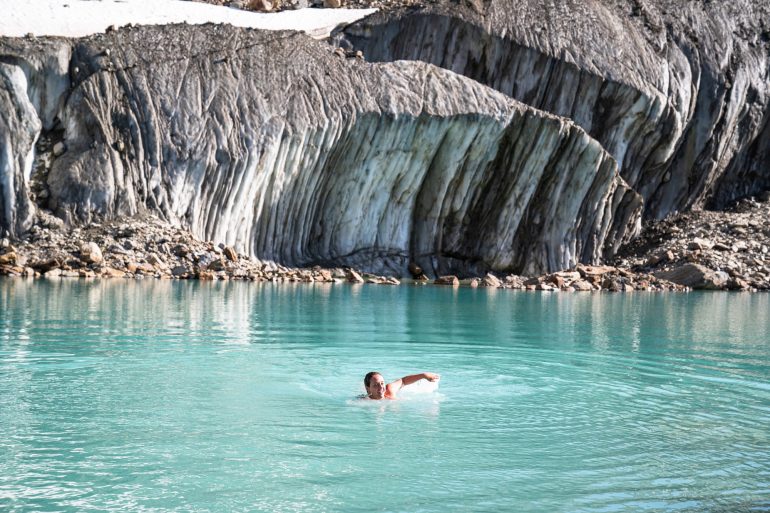 Grubenalp-Rothorn-Gletscherseewini: A Hidden Gem in the Saas Valley

Located above Saas-Balen, the Äusser Rothorn is a place to take in the wonder that is the entire Mischabel Group. The panoramic view from the summit stretches from Allalin to the giants Alphubel, Täschhorn, Dom and Lenzspitze, on to Nadelhorn, Stecknadelhorn and Hohberghorn, and down to Dürrenhorn.

Getting Up There
From the Gruben Alp to the 3’147 meter summit it’s a 2-hour hike which isn’t too strenuous. To get to the Alp you have several options. You can hike the trail from Saas-Balen, a steep 2.5-hour climb. Alternatively, you can take the trail from Saas-Grund. It also takes 2.5 hours but is much easier due to a higher starting elevation. If you prefer to go by car, you can take the mountain road from Saas-Balen. There is a fee of CHF 10 to use the road with tickets available at the ticket machine in the Saas-Balen parking lot. For a more leisurely and scenic option, you can take the Kreuzboden Gondola and then walk 1.5 hours north to the Alp. This takes you along a mostly flat traverse, a beautiful and meandering hike that I totally recommend.

Facilities and Accommodation
The Gruben Alp hut, at 2300 meters, is part of the SAC. If you wish to spend the night, you can book a stay in this cosy little hut online: Link to https://sac-saas.ch/grubenalp/. The sleeping arrangements are bunk beds and can currently accommodate 8 people. You can also rent the hut for the day and have use of the well-stocked kitchen, stove, and barbeque along with the picnic tables and WC.

Alp First – Summit Second
I’m a big fan of the Gruben Alp because it gets the long sunsets that we miss down in the Saas Valleys. Earlier this year, we rented the hut for a birthday party around the time of summer solstice. There we basked in the sun’s golden rays until they dwindled over the mountain tops, fading into evening twilight around a half past nine. For this last adventure, I took my 6-year-old son and a couple of friends, Dominic and Electra. We spent the night camping under the stars near the Alp so we could get an early start on the summit the next morning.

The trail to the summit begins at the parking lot near the Gruben Alp and meanders through some grassy fields, across a creek, and up and along an old stone wall before ascending to the Äusser Rothorn. This is a milder climb than Mittaghorn, and I’d say more comparable to Almagellerhorn. The trail gains elevation quickly and with it comes more rocky terrain and an unusual view of Fletschhorn from the side. In the areas that require a slight amount of climbing, there are cables to hold on to and iron bars to grab or use as footholds.
As you near the summit, you start to get a peek of the turquoise green glacier lakes hidden behind. These make for a great day trip themselves or an extension to the hike if you’re up for the challenge. The summit itself is slightly round on top and has ample space to sit comfortably on flat rocks and enjoy your lunch or a snack while you take in the views.

On to the Lakes
We wanted to visit the glacier lakes as well, so we walked down the Rothorn Ridgeline. This took about 3.5 hours. There is no trail from the summit along this ridge, and because there are some exposed areas, I wouldn’t recommend it to anyone afraid of heights. I’ve also gotten there by walking back down toward the Gruben Alp and then taking the mountain road up to the lakes. This takes approximately the same amount of time as following the ridge. A fork in the road leads to the upper or lower glacier lakes. My preference is to visit the upper lake first and then follow the outlet down to the lower lake. There’s no official trail for this, but walking the wide flat riverbed is an almost otherworldly experience as it’s above the tree line with no greenery. But the best is yet to come.

There are few places in the world where you can visit water literally at the edge of a glacier. The ice walls here form sheer cliffs that melt or break away straight into the lake. Although this water is just a tad warmer than freezing in summer, one of our friends decided to take the plunge anyway. She said it was the coldest water she had ever swam in, but a hurt that felt so good. Every time I go there, I find myself staying for hours on end because it’s such a special place. It could be Patagonia, right here in the Saas Valley. The area also benefits from long summer days like the Gruben Alp, so you can stay a while.
As everyone walked down to the lower lake, I lagged behind to get some photos. The blue green water in the foreground makes a perfect complement to frame the Mischabel Group in the background. It’s a sight to behold and certainly something you won’t see every day.

A Full Day of Fun
For us to both summit Äusser Rothorn and visit the glacier lakes meant a 12-hour day with plenty of leisure time to chill, swim, snack and have lunch. You might think that’s because we had a 6-year-old with us, but he was actually one of the better hikers in the group. Growing up in Saas-Fee makes for very young athletes 🙂