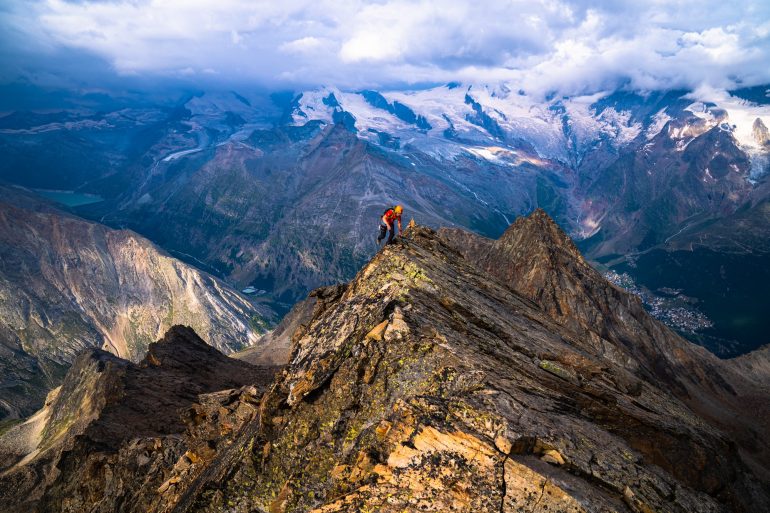 Weissmies – An Indiana Jones path of the alps

Weissmies used to be billed as an easy 4,000 m peak, suitable for someone’s second big summit, after climbing Allalin. You could gondola up to Hohsaas, and in a matter of 3.5 hours be at the summit. In 2005 at the 150 year Anniversary of the first ascent of Weissmies, there were 300 people in one day arriving at the summit. But in the last few years, it’s become a much more challenging peak, and that number has plummeted to just a handful a day.

The warming temperatures and the melting of the glacier have resulted in more crevasses and a danger of falling ice. The normal route was even closed at the beginning of this year as it was deemed too dangerous. Then the Saas-Grund Gemeinde approved a route change to avoid the fall line of potential breaking ice.

I spoke with several of our local guides about the normal route before going up this time. One told me he doesn’t take clients on the normal route anymore, another said he would only do it with a client that he knew well and whose abilities he had confidence in. Yet another told me the new challenges make it more fun, now it’s quite an adventurous route to the summit.

Besides the normal route, there are 3 other routes to the Weissmies summit, each of varying difficulties. I had done all of the routes except for the Rotgrat, and I always wanted to do this route as it’s the ridgeline you see from the village. It’s the view I see every day from my living room. It didn’t used to be very popular, but since the normal route has become so much more challenging, more people are moving to the Rotgrat. It’s also not as technical as the Nordgrat and you can make a loop of it down the Südgrat or start from the Almageller Hütte.

But that’s not what I was looking for. I was in need of some training, as I was hoping to do the Mischabel traverse a few days later. So instead of spending the night in the Almageller Hütte or starting with a gondola ride to Hohsaas, I started from my house, planning to ascend the Rotgrat and descend the Normal route.

I left my house at 2:45 am and biked down to Saas-Almagell in the semidarkness. The moon was full, but in the trees along the road to Bodmen it was quite dark. I saw a flying object heading towards me and at the last second I turned my head away, only to have a bat crash into the side of my helmet. What a second cup of coffee!

At 3 am I met my buddy in Saas Almagell and we started up to the Almageller hut. The moon had set and it was a bit cloudy, but we did some speed walking in the darkness, encountering lots of animals, including a lynx and the usual suspects, the steinbock. At dawn we passed the hut, making our first stop at a small lake that perfectly framed Allalinhorn in the early light.

A few years ago, they repainted all the trail markers, so you really can’t get lost. This is also really important for those cases when the weather rapidly changes and you have less visibility. The Rodgrat offers great views over the Saas Valley, the trail is not very technical, and it is easy to scamper along if you are in good shape. There are also some fun mountaineering climbing sections.

We ascended the ridgeline all the way to the glacier, where we donned our crampons and got on the rope. At this point the clouds were hovering right over the summit. There were a bit of hide and seek clouds, coming in and out all the time, so we felt comfortable enough to continue. When we did summit, after 7 hrs 20 minutes, including breaks for snacks and photos, it was a bit anticlimactic. There is no cross on the summit, just a stake with some Tibetan prayer flags. The weather didn’t live up to what was forecast, so it wasn’t possible to get any nice photos.

But for me, the best part of the whole adventure was still ahead, the challenging descent down the normal route to Hohsaas. Standing at the summit looking down, we could see the vast difference from what the route was 5 years ago, and it’s current state. It was not going to be a straight shot, and nothing like the highway up to Allalin that it used to be comparable to.

There was an obvious need to be cautious among so many risk factors. This was such a warm summer. All around us the snow was slushy with crevasses right and left. The trail had been closed for some weeks, and even though it was open now, no one was on it because of the looming dangers.

From the summit, I made a quick call to my brother in law, Andi, a local guide. He gave me an update on the normal route from a fellow guide that had done it 3 days earlier. Andi encouraged me to descend this way, saying the worst thing that can happen is we have to make the call to turn around and go home the long way.

And so we began to descend through the labyrinthine. It was, no joke, an Indiana Jones style path to avoid doom in the form of huge seracs, massive crevasses, and step icy sections that had to be crossed. Slowly and carefully, we navigated this maze, hyper alert for any break in the ice, anything that might come crashing down around us. I snapped a photo at the little lake just above the top of Hohsaas and looking up at the glacier above it seems crazy that we just passed through there. You can’t really pick out the route at all. After a 12 hour day, I came home happily expended, tired but feeling that full body high from the adventure.

Depending on your vantage point, Weissmies looks like there isn’t much ice left. It’s hard to tell if the glacier even connects top to bottom any more. Looking at the amount of water pouring out in summer, watching the glacier melt yearly, it seems obvious that very soon there will be no more glacier. But once we were in there, we experienced the north facing section to still be loaded with ice. It was a similar experience to when I went hunting seracs a few weeks before. The glacier still holds a meaty chunk of ice, it’s not dead yet. If your health allows it, I really encourage you to hire a guide and go see the glacier before it’s gone.