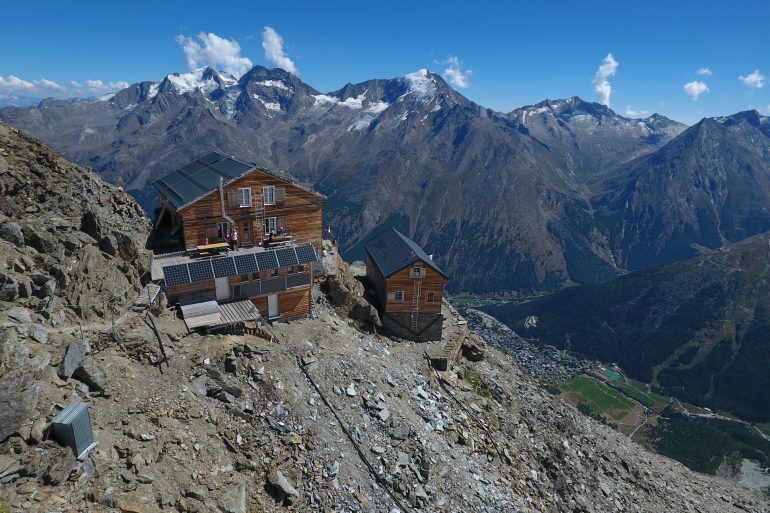 Stress and hectic stay in the valley

Maria Anthamatten wouldn’t change her job for the world. No wonder: as the warden of the Mischabel Hut, wonderful sunrises are part of the daily routine for the woman from Saas-Almagell.

There are probably not many sinks in the world with such a view. When Maria Anthamatten’s team washes the dishes in the evening, the evening sun bathes the surrounding four-thousand-metre peaks in a red light. Then the 38-year-old from Saas-Almagell knows: “It’s a huge privilege to be up here. “In 2021 she will tackle her eleventh season at the Mischabel Hut. A back-breaking job at 3,340 metres above sea level: the first climbers are served breakfast at 2.30 in the morning. For them, the hut with its beds is the base camp for tours to the surrounding four-thousand-metre peaks such as the Nadelhorn or the Lenzspitze. For Maria and her team, between mid-June and mid-September, it’s a workplace and home all in one. There is not much time for privacy. The working days are long: it is not unusual to finish work at 10 pm. “Of course the days are very intense,” says Maria. “But with the right team, it usually doesn’t feel like work up here at all. “

Maria was practically born with an enthusiasm for running the hut and the mountain world: Grandfather Alfred Anthamatten was a mountain guide and ran the Almagellerhütte. It is now run by her uncle Hugo and cousin Gabriel. Even as a child, Maria helped out at the Almagellerhütte. The trained nurse, who works in the Visp hospital during the winter months, applied for the Mischabel Hut and was promptly given the job.

Solar power and ice water
The Mischabel Hut is also a worthwhile destination for hikers: the approach via the varied but demanding trail takes three hours from the top station of the Hannig cable car. Exposed areas on the hut trail are equipped with wire ropes and a ladder. Maria and her team provide refreshments at the hut with menus prepared on a gas cooker. A solar system supplies the hut with some electricity. But it is not enough for kitchen equipment. The water supply is also a back-breaking job: in spring, the team digs up to five metres deep through the snow to the glacier above the hut. From here, pipes carry the ice water to the 20,000 litre fas – send tanks near the buildings high above Saas-Fee. Despite the hard work, Maria closes the shutters of the Mischabel hut every autumn with wistfulness: “It is a huge privilege to be able to spend the summers up here,” says the woman from Saas-Almagell. The sunrises alone make up for all the effort; “It’s like leaving the stress and hustle and bustle in the valley in spring. “

Saas Mountain Hut Tour
Discover the Saas-Fee/Saastal holiday region from its alpine side. The multi-day Saas Mountain Hut Tour takes you through the Saas mountain world in around 26 hours of hiking time, 65 km distance and over 5,227 metres of altitude.  Rough mountain flanks, glacier ice under your feet, alpine tranquillity, breathtaking views of the Saas 4,000-metre peaks and hut life at the Weissmies, Almageller, Britannia and Mischabel huts await you.