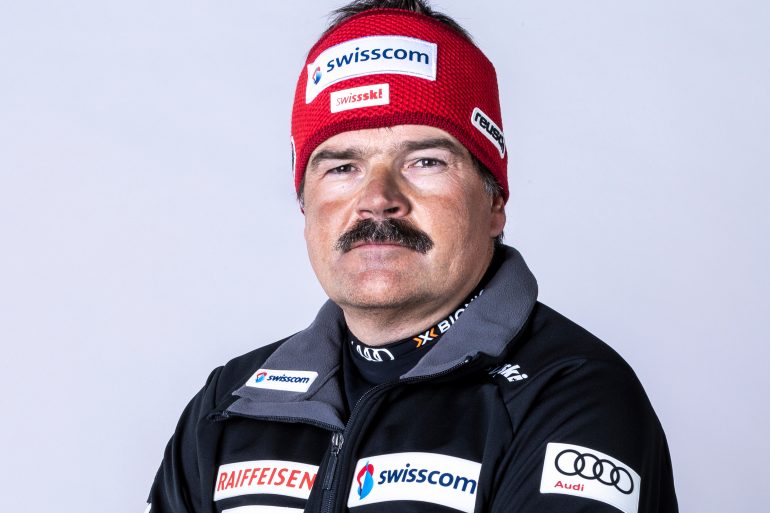 “Now, we are the target”

In 2020, under head coach Tom Stauffer (51), the Swiss Alpine Ski Team achieved a historic victory. For the first time in 30 years, they won the FIS Nations World Cup.

Tom Stauffer, 51, is rarely at his home in Unterlangenegg, Bern. His life is lived out of a suitcase. “I’m on the road for about 200 days a year,” says the man with the trademark moustache. Stauffer has been on the alpine ski circuit for over 20 years. At the start of his career, he worked mainly with juniors from the regional squads. Subsequently, he spent time in the USA and Sweden honing the technique of their rising stars. The German Women’s Ski Team also achieved notable successes under Stauffer ’s direction. After these spells abroad, he moved back home in the spring of 2014 to rejoin Swiss-Ski. At the time, Switzerland stood a lowly sixth in the international rankings. Austria, their arch-rival on every icy racing piste across the globe, had just won the Nations Cup for the 24th time in a row.

The ‘General Manager’
A lot has changed since then. Promising youngsters like Daniel Yule and Marco Odermatt have matured into star athletes. Relentless incremental improvement and, what Stauffer refers to as, “excellent work in talent scouting” by youth team boss Hans Flatscher, culminated in the team winning the Nations Cup at the end of the 19/20 World Cup season. Switzerland is on top of the ski world once more. Stauffer has been a key part of the success. He sees himself as a general manager. Much like the managers in major US sporting leagues, he must assemble a team from the most promising athletes at his disposal. On the competition slope, racers compete as individuals. Nevertheless, being part of a team is important. “Having competition during training is vital,” says Stauffer, “the athletes push each other to a higher level as a result of internal competition.” The team also plays another important role. During the long competition season, athletes are always on the road and away from their friends and family. As the Swiss Head Coach puts it, “it’s essential for there to be others around with whom they can relax and unwind.”

More flexibility at home
For many years, Saas-Fee has been an important fixture in the Swiss-Ski training schedule. The glacier slopes, situated at 3,500 m, provide athletes with optimal training conditions even in midsummer. “We benefit enormously from the flexibility that training at home gives us,” says Stauffer. It also keeps costs down compared with relocating to training facilities in New Zealand, Chile or Argentina during the southern hemisphere’s winter. This is no small consideration: each training group needs 3 – 4 tonnes of equipment, which would need to be shipped halfway around the world. Slalom ace Ramon Zenhaeuser hasn’t trained in the southern hemisphere for several years. He now does all of his pre-season preparation in Saas-Fee. And that’s not only because finding enough legroom on flights can be a challenge for the two-metre giant. “I don’t know of a comparable summer ski area anywhere in the world,” Ramon, who has been the official ambassador for Saas-Fee’s summer skiing since 2018, told us. The ability to train on the steep World Cup course situated on the Feegletscher is a major factor in the Swiss taking back the global crown in the technical disciplines of slalom and giant slalom.

For many years, Saas-Fee has been an important fixture in the Swiss-Ski training schedule. The glacier slopes, situated at 3,500m, provide athletes with optimal training conditions even in midsummer. “We benefit enormously from the flexibility that training at home gives us,” says Tom Stauffer.

Early mornings, long days
Of course, Swiss-Ski cannot afford to rest on its laurels. The dismal results in the first year following the retirement of the legendary Marcel Hirscher have been a wake-up call for the Austrians. “Now we are the target,” admits Tom Stauffer. Which is why it’s particularly important to make the most of their time training in Saas-Fee. That means long days for the head coach and his team. Their alarm clock is set for half-past four in the morning. As the sun is rising, the team set up gates on the glacier marking out training courses. They then video every single run the athletes take, for painstaking analysis back at the hotel later on. While the athletes follow up with strength and endurance training, the trainers are already planning the next day’s session. Typically it will be 7 pm before Stauffer can call it a day.