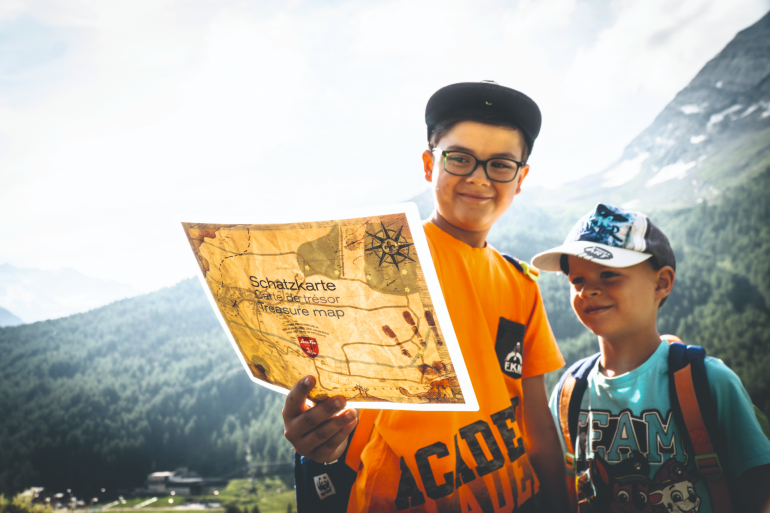 On the hunt for treasure

New to the Saas Valley this summer, in addition to the animal treasure hunt, we now have a second themed family adventure. We’re proud to be collaborating on the Valais treasure hunt with Valais/Wallis Promotion, youth magazine Spick, and seven Valais holiday destinations.

In Saas-Fee, we’re offering an exciting water-themed treasure hunt. In fact, water is the common theme across all participating destinations, providing an opportunity for children and adults alike learn about mountain lakes, glaciers, irrigation, and the water supply in mountain villages.

The Saas-Fee leg of the treasure hunt begins at the Saas-Fee tourist office and leads down Obere Dorfstrasse to the village centre. After the church, the trail branches off to the left where you traverse the old town to the Fee Vispa. Near the Bergbach, you’ll find the first two stops on the treasure hunt.

After the stops, set off again up the hill in the direction of the Alpin Express. Before reaching the gondola station, turn left down the forest road towards Saas-Almagell. And when you reach an open area, called Grundbiel, turn right onto the Suonenweg. Follow the path, climbing to the height of the Adventure Forest rope park and you will find the third stop. Continue along the trail and just before you leave the forest, you will come across the fourth stop.

At the end of the neighbouring meadow is the Kneipp, a refreshing cold water spa circuit, the perfect place to take a break, where you will also find the fifth clue. From there, continue towards the Wolfsgrube barbecue area, where you are reunited with the Fee Vispa. Be careful: the sixth stop is at the first bridge, but do not cross there. Instead, continue along the right side of the stream to the second bridge. There you will find the seventh clue and then return through the alpine meadow to the village, passing the final stop on your way back to the tourist office, where the treasure hunt comes to an end.

The brochure for the Valais water-themed treasure hunt can be found at the Tourist Office. The Valais treasure hunt is suitable for children from 6 to 12 years old. Don’t forget to also ask about the animal treasure hunt!