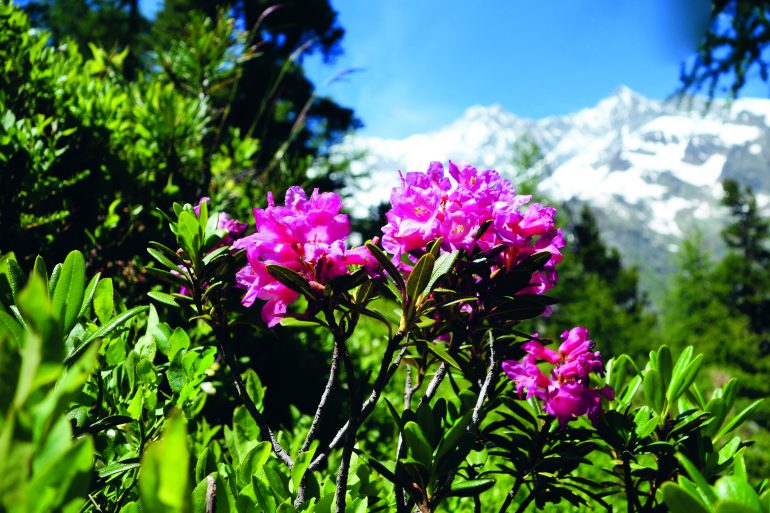 The Saas Valley’s early guests were not exclusively daring mountaineers. Many came for the unique flora: the Saas Valley was an El Dorado for alpine flowers.

Botanical tourism can be traced back as far as Pastor Johann Josef Imseng (1806-1869). The world of alpine flowers fascinated the people of the 19th century just as much as the mountains did. As a pioneer of tourism and enthusiastic mountain guide, Imseng took on numerous first ascents alongside visiting mountaineers. He also knew the plants of the Saas Valley and their healing properties better than anyone. And so he led interested guests and botanists to the hidden locations of rare plants. These were no casual outings though – they were utterly wild excursions.

Today, people’s fascination with the Saas Valley’s diverse flora is experiencing a renaissance. Guests from as far as Asia come to the “mediterranean” mountain valley for its alpine flowers. For some, admiring the thousand-plus plant species in their natural setting is the epitome of a perfect holiday.

Rockfoils (Saxifrages) and Edelweiss
It‘s hard to believe that just a few metres below the 4,545-metrehigh peak of the Dom, the highest mountain in Switzerland, you can find flowers. The purple mountain saxifrage (Saxifraga oppositifolia) is the highest flowering plant species in Europe (4,540 metres) and happily blooms in the midst of rock and ice. It seemingly seeks out the wildest spots and is well-armed against the cold. No wonder these alpine flowers command such fascination.

You can discover the Saas Valley‘s incredible flora on the Alpine Flower Trail, a specially created themed trail from Chrizbodu (Kreuzboden) to Saas-Grund. With apps such as the Flower Walks app and Flora Helvetica, you can learn about the various alpine flowers around you. Many fans of mountain flowers, however, would rather discover the extraordinary plants for themselves. It’s understandable, finding an Edelweiss for yourself brings a satisfying which following a signpost simply doesn‘t.

The healing power of the Saas Valley‘s plants is also being rediscovered. Due to the altitude and their slow rate of growth, the effects of some medicinal plants can be particularly intense.

In addition to the craft of plant collecting, the exhibition illuminates key collectors from the end of the 19th century and their relationship with Saas-Almagell. The exhibition brings together an extensive collection of herbariums and corresponding records by Alfred Keller and Otto Naegeli who together explored the flora of the Saas Valley and the adjacent Matter Valley between 1891 and 1924.

Over a century ago, Keller (1849-1925), an engineer, and Naegeli (1871-1938), a Zurich professor of medicine, came together to examine the exceptionally rich flora of the Saas Valley. During their visits between 1891 and 1924, the pair met up regularly, collecting plants while on hikes, and preserving them in a herbarium. With around 130,000 specimens from 50,000 collections, the Naegeli/Keller Herbarium (HNK) is one of the largest private plant collections in Switzerland. Today it is kept at the University of Zurich. It was restored and evaluated in 2014/15, under the direction of Dr Margrit Wyder of the Department of Systematic and Evolutionary Botany
(ISEB). The Saas-Almagell and Zurich exhibitions curated by Dr Wyder are a joint endeavour by ISEB and Saastal Tourism.