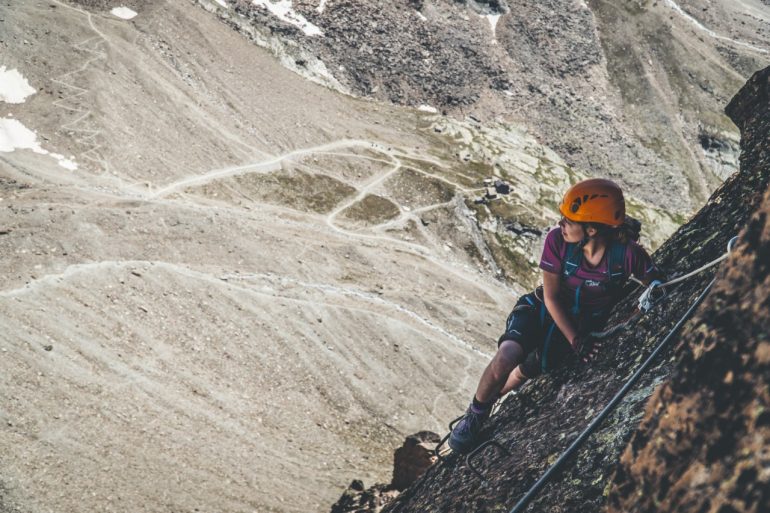 Not for the faint-hearted: The Jegihorn via ferrata in Saas-Grund

1,000 metres of steel cable, 400 anchor points, and a stomach-churning suspension bridge: Jegihorn, above Saas-Grund, is one of the most jawdropping Via Ferrata in the Alps.

The route to the Jegihorn has more than earned its reputation as the “panoramic Via Ferrata.” Its exposed south-facing climb rewards those who brave it with magnificent views of the Mischabel range and many other 4,000-metre summits.

First things first: This Via Ferrata’s starting point is at the base station of the Hohsaas gondola in Saas-Grund. It’s best to get an early start as the whole route takes about seven to eight hours. Remember to check the storm risk when planning your day an before starting the climb, especially in midsummer. If don’t want to get up and out quite so early, you can stay the night before at the 2,700-metre-high Weissmies hut and start the route from there. This not only saves you around an hour‘s walk to the Via Ferrata entrance in the morning, but those who spend the night also get to witness the sunrise over the Mischabel group. The first rays of sun bathe the summits in a cerise light. The view will give you goosebumps before you even put your hiking boots on.

Kit list: A helmet and harness with a Via Ferrata set are mandatory on the Jegihorn route. Both can be rented at local sports shops. It is also important to take enough to eat, and plenty of fluids. The south-facing route is exposed to the sun all day, throughout the season. It’s enough to make you sweat even towards the end of the season, in October. A full flask of tea is a real lifesaver.

The start of the Via Ferrata, which is maintained by the local mountain guides, sits at around 2,800 metres above sea level. Before hooking their carabiners onto the first of the 1,000 metres of steel cable, climbers should be aware of one thing: the Jegihorn Via Ferrata is quite technically demanding and is classified between K3 and K4 in difficulty. Note that the Via Ferrata to the Mittaghorn (3,144 metres) above Saas-Fee is much better suited to beginners.

At 3,206 metres above sea level at its highest, the Jegihorn is the highest Via Ferrata in the Western Alps. Several ladders and around 400 anchor points secure the path along the ridge to the summit approach. Then the climbers face a true test of their mettle: the most direct route to the main summit is via a lofty three-rope suspension bridge, a highlight of the tour. But if that induces a fear of heights, you can bypass the bridge. An alternative route leads down into the gorge and climbs back the other side towards the summit. From the peak, there’s a breathtaking view, a summit register, and a collection box. Contributions to the latter go towards the hours of maintenance required on the route each year thanks to the severity of Saas Valley’s winters.

Though you’ve made it up, don’t underestimate the descent that follows. Scrambling down the large boulders and scree is a challenge in itself, and takes a fair amount of energy. It’s here that an early morning start can pay off, because catching the last gondola down from Kreuzboden saves 1,100 metres of further descent.