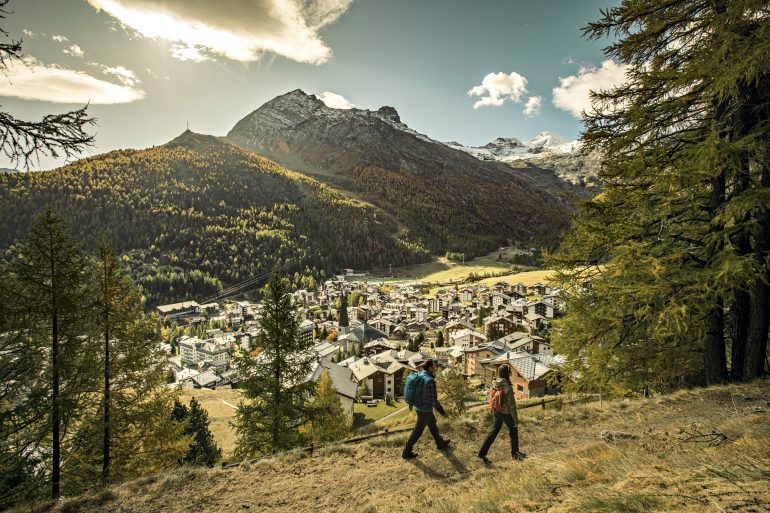 In 1938, Carl Zuckmayer fell in love with the mountains of Saas-Fee. Twenty years later, he settled in the glacier village, and today you can follow his footsteps on his favourite walk – now known as Carl Zuckmayer Trail.

It begins in front of Zuckmayer’s house on Obere Wildistrasse, Saas-Fee. From outside Vogelweid house, hikers can admire its charming larch wood exterior, white shutters, and heavy slate tiled roof. “This is the one place I can live life to the full,” wrote Zuckmayer.

Turn around, and you’ll enjoy a staggering view of the Almagellerhorn. He wrote in his autobiography: “When I look out the window of my study, under the gable, into the moonlit night, I know: as long as I can stand here and breathe, (…) I am mighty. Mightier than the richest, most powerful man. Under the moonlight, my shadow cast over the mountainside covers the entirety of its face, reaches all the way up to the Almagellerhorn’s characteristic pyramid peak – and everything covered by the shadow, is mine.”

Virtually every day, come noon, Zuckmayer left the house accompanied by his dog, Axel; with his walking stick and legendary mountain hat in the summer, his ski pole and fur cap each winter. His wife, Alice, explained, “He has a rhythm: walk, pause, look, reflect; in those moments, he’s in an impenetrable world of his own.” So take your time as you follow Zuckmayer on his walk, and look around with him. Stand still. Reflect.

Follow the garden fence to the north, turn into the small lane on the right, and follow the path. You’ll come across a sign for Zuckmayer Trail, and within a few minutes, you’ll find yourself at the edge of the forest below Hannig. The path then leads north to Bärenfalle, where you’ll find a picturesque mountain lodge. From there, follow Zuckmayer left, to Melchboden, and walk parallel to the Märliweg (Fairy Tale Trail), one of the Saas Valley’s 14 themed trails. Highlighted on panels along the walkway are five of Zuckmayer ’s most famous quotes. One is drawn from an acceptance speech he gave on becoming an honorary citizen of Saas-Fee: “home isn’t where one is born, but where one wishes to die.”

Zuckmayer then leads hikers further through the larch forests he loved so much. When passing the centuries-old trees on Hannig, he was known to tip his hat in respect.Less than an hour in, Café Alpenblick marks the highest point on the hike, at 2030 metres. Zuckmayer was a regular visitor to the cafe’s terrace where he loved to read and write. His favourite spot is still marked with a photo of him smoking a pipe while reading a manuscript. From the cafe, you can see across to the Portjengrats ridge and the Almagellerhorn opposite.

Behind Café Alpenblick, the route zigzags leftwards through the forest down into the village. When you reach the street, turn left and continue until you come to a signpost. The Zuckmayer-Weg sign is unfortunately missing. Hikers should follow the small path on the right-hand side, leading into a meadow, and continue following the path signposted Dorfweg. Instead of proceeding down the stairs, continue along the small path, past the wooden bench and back towards the Wildi. After around 10 minutes, you will find yourself back at the first signpost for Zuckmayer Trail. There, you can follow the lane back to the start, to Zuckmayer’s house.