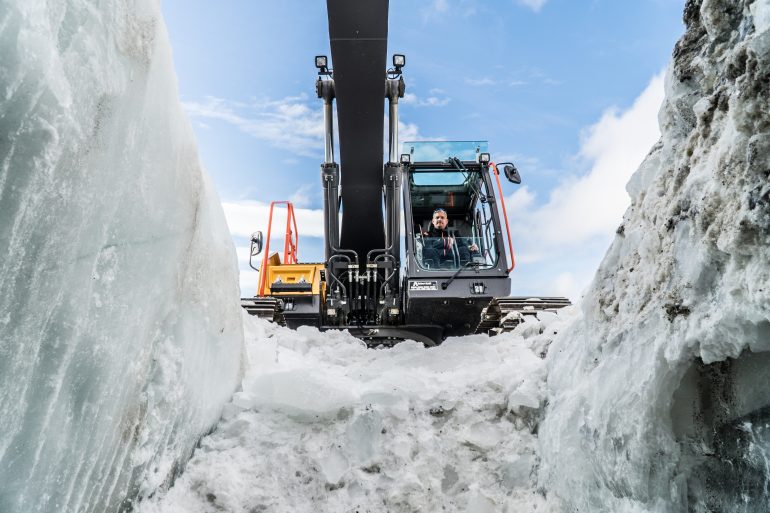 “We have an understanding, the glacier and I”

By the time Thomas Zurbriggen has finished his work, the glacier piste in Saas-Grund looks just like any other ski run. But below the perfect corduroy lies ice. This is the story of how Thomas creates an immaculate piste on top of a glacier.

The snow cracks under the snowcat’s caterpillar tracks. The vehicle comes to a sudden, jerky halt, shaking the cabin and the driver inside. Thomas pushes the accelerator pedal to the floor, but the machine just tips forward further, its tracks digging deeper into the nothingness below. He kills the engine and climbs out of the cabin, radioing his colleague: “I’m wedged in a crevasse, you’re going to need to tow me out”. “Understood, I’m on my way,” comes the reply. His co-worker soon arrives in a second snowcat, and fills the crevasse below with snow, freeing Thomas’ own machine.

“Thomas Zurbriggen knows the Trift Glacier like no other.”

No skier has ever fallen into a crevasse on the groomed piste. But mere metres away from the marked run, it’s a different story entirely. One skier rescued by piste patrollers was discovered with his pants down, quite literally. He had ventured just beyond the edges of the piste to relieve himself, and the snow beneath him gave way into the crevasse below. Thomas never leaves the pistes when he skis up here himself. Far too dangerous, he says. “I see the glacier in the summer, and it’s a real labyrinth of crevasses,” he gestures as if to dismiss the concept.

The ski season is still a long way off. Hikers in shorts are sipping coffees on the Hohsaas terrace and bathing in the late summer sun. Bikers, rather than skiers, descend the trails from Kreuzboden to the valley floor, the marmots whistling when they stray too close.

Back on the Trift Glacier, not far from the Hohsaas cable car station, Thomas tips the excavator’s bucket and chunks of ice tumble down, filling the crevasse. He won’t be satisfied until he can comfortably walk across the crack in the ice. Then he moves on to fill the next one. It’s all part of preparing the glacier piste for the coming winter. Grooming pistes generally involves moulding the snow with a snowcat – but for Thomas and the glacier piste, there’s a long way to go before that. In the Autumn, it‘s more of a civil engineering project. The rubble and boulders deposited by the glacier over the summer months need to go. Gradually, the slope is smoothed and evened out. Thomas‘ digger climbs from one plateau to the next, its spiked tracks bite into the ice like a climber’s crampons.

Skiers have been enjoying the glacier piste at Hohsaas since 1983. Back then, Thomas’ forebears would clear the ice and rock with chainsaws and a single small digger. Even for Thomas, that’s hard to imagine. He has heavy machinery, two excavators and four snowcats, at his disposal. One of them is an even more powerful winch-cat. These monsters weigh in at between nine and 12 tons each. But even with this arsenal behind him, building a ski piste on the tongue of the glacier gets more challenging each year. The scars left by the retreating ice are hard to heal. Here, climate change is an everyday reality.

“I often chat to Saas-Fee’s head of slope operations.”

Thomas looks wistfully up at the summit of the Weismiess, at the glacier clinging onto its rock face. He reminisces about summers spent up at the Weismiess Hut with his grandfather. Back then, the glacier was a huge expanse of ice, almost reaching the hut itself. Since then it has retreated more than 800 metres. “It’s painful to see how quickly it’s melting,” he says, “and it just gets faster, year on year.” Nevertheless, Saas-Grund is committed to preserving the glacier ski area south of the lift. The icy underlayer keeps the snow there cold and powdery well into the spring. “There are years when you can touch the glacier’s seracs from the piste,” says Thomas, and guests travel from far and wide to experience this proximity to a glacier. Saas-Fee already preserves the snow over the summer months using special protective covers, which it then uses to prepare the slopes the following winter. Now, Saas-Grund is looking into employing the same technique.

Driving a snowcat is a childhood dream. For Thomas, it was, at least. But even that can become ordinary when it’s your daily routine. His daily view out over the eighteen four-thousand-metre peaks no longer impresses him in quite the same way it does first time guests to the Saas Valley. “But when a metre of fresh snow falls, then the excited little boy comes back to the surface,” he says with a wink.

His job certainly isn’t for everyone. The long, quiet nights can get lonely with snowcat drivers working when the guests down in the valley are snuggled up in their beds. But Thomas treasures these quiet nights in the mountains. The stunning sunrises over the Mischabel range are more than enough to make up for it.

One autumn, a seemingly normal day of excavation on the glacier turned into a particularly memorable moment for Thomas. As he was clearing the ice with his excavator shovel, something caught his eye. Wait, was that a trouser leg? As it turned out, the glacier had finally released two Bernese mountain climbers who had been missing for 35 years. Not quite your normal day at the office.

In winter, six snowcat drivers, five piste patrollers, a mechanic and a snowmaker look after Saas-Grund’s ski slopes. Anyone with a category F driving license is allowed to drive a snowcat provided they complete a two-day driving course. But in addition to this, Thomas has a license to drive lorries and construction vehicles and is a trained piste patroller. He’s also completed avalanche management training including avalanche blasting and charge throwing. Only with all this under his belt, can Thomas, together with the head of the mountain rescue, guarantee safety on the glacier piste.

As soon as the first snow falls, Thomas‘ crew climb aboard their snowcats. The weight of the beasts breaks down the snow crystals. They drive back and forth over the snow, condensing the snowpack and pushing the air out of it, preparing a perfect base for the ski slope. The flawless, white corduroy lines come last. The heavy-duty front tiller spins at 1000 revolutions per minute, digging five to six centimetres deep into the snow as it crushes lumps and breaks down artificial snow. The rear tiller is flexible and adapts to the terrain to create the wonderfully smooth corduroy pistes. It’s time to enjoy some turns.