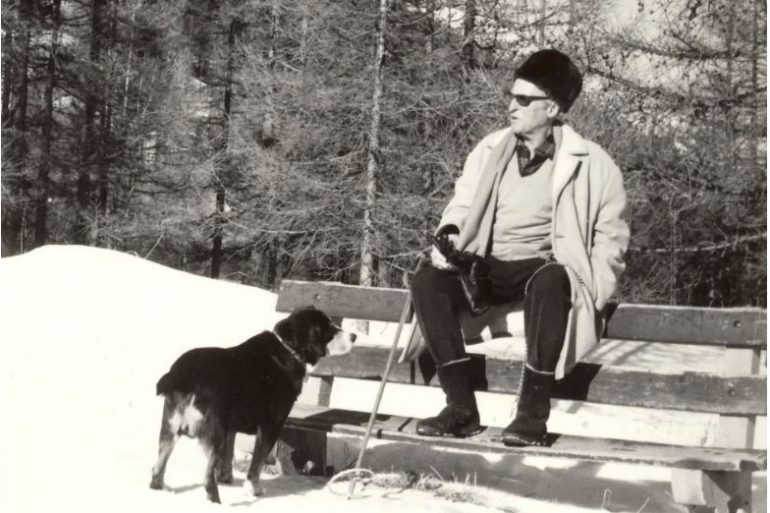 Shortly before the outbreak of World War II, Carl Zuckmayer fled to Switzerland, and eventually ended up visiting Saas-Fee. What was to become his lifelong love for the place struck him like a thunderbolt in 1938.

“As you reach village level, you round a corner and all of a sudden come face to face with the mountains. It’s a view like no other. You’re standing at the end of the world and at its very centre all at once, at its edge and right in the middle. (…) At first, all you can do is look up; it takes your breath away. (…) “Here, if only we could stay right here,” we said!” That is how German author Carl Zuckmayer describes his very first sight of Saas-Fee, remembering the late summer of 1938 in his autobiography, As If It Were A Piece Of Me.

Escaping Hitler
Zuckmayer moved to Henndorf, Austria in 1926, following his theatrical breakthrough with Der fröhliche Weinberg (The Merry Vineyard). However, with Hitler’s invasion in March 1938, the situation rapidly became difficult for the half-Jewish Zuckmayer, who had explicitly spoken out against the Nazi regime. So Zuckmayer fled to Switzerland with wife Alice, initially renting an apartment on Lake Geneva. In August 1938, they headed to the fresh air of the high-altitude Valais to escape the intense heat of the lowlands. Their journey took them to St. Niklaus and up to Grächen, where they climbed up to Grächener Hannigalp and back down through the hamlet of Schweiben to the valley road. From there, they took the Postbus to eventually reach Saas-Grund. A convoy of mules carrying their luggage took the forest road to Saas-Fee, while the Zuckmayers chose the Kapellenweg (Chapel Trail). The latter route leads south of Saas-Grund, below the confluence of the Fee and the Saaser Vispa River. A good half an hour later, as they approached the last part of the climb, the pair found themselves stood in front of Zur Hohen Stiege Chapel. In that instant, Zuckmayer fell in love with the picturesque sanctuary, the building itself dating back to 1687. With the daylight fading, the Zuckmayers dragged themselves away from the scenery in order to climb the monolithic steps leading to Saas-Fee, and the moment Zuckmayer would never forget. In his autobiography, he continues: “Saas-Fee was, at that time, still a small mountain village, home to just 468 souls (…) encircled by vast, sweeping carpets of mountains, lined with ever-growing larch and Swiss pine forest, and covered with a sky so broad it feels like you’re on open water – with freedom and vastness all around.” It breathed life into Zuckmayer’s soul.

“For me, each day not
spent here in Saas-Fee is
merely half a day”

The Saas Valley: the Zuckmayers’ last home
Alice and Carl Zuckmayer emigrated to the US shortly after their first visit to the valley. However, once the war had ended, they returned to Saas-Fee no less than 14 times, before eventually buying a house and settling down in the Wildi quarter in 1958. Over the years, Zuckmayer and his wife explored the entire valley, visited alpine huts and ascended its various passes. They crossed the Fee and Allalin Glaciers, with the assistance of mountain guide Alfred Supersaxo. Zuckmayer’s first four-thousander was the Allalinhorn, considered the hallmark of Saas-Fee.

In Saas-Fee, Zuckmayer discovered a certain kind of magic, “in the vastness of the sky, (…) unconstricted by its towering mountains, in fact magnificently framed and bolstered by them”. In his autobiography, he describes the panorama of four-thousand-metre-high mountains, the Allalinhorn, Alphubel, Täschhorn, Dom and Lenzspitze as an “enormous silver frame, a closed semicircle: snow-capped summits to the south arranged in inexplicable harmony; a string of Gothic cathedral towers to the west”.

Zuckmayer lived in the glacier village until his death in 1977. Saas-Fee was not simply the setting of his last great successes as a writer; his time in the village was a euphoric finale to an extraordinary life. In his own words: “For me, each day not spent here in Saas-Fee is merely half a day.”