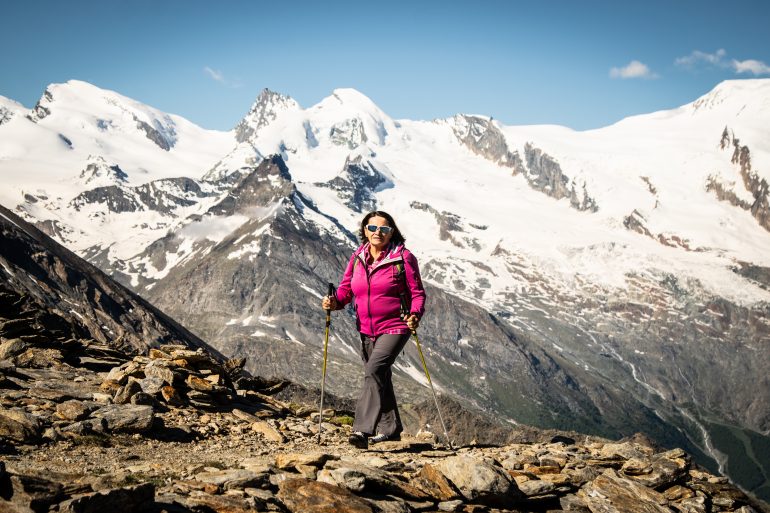 The Mischabel Chain, the Weissmies Group, the Felsnadeln in the Mont-Blanc-Massif, the Dufourspitze: Maggi Voide-Bumann is the first female Alpinist to have summited all 82 of the Alps’ four-thousanders.

For her, the most important thing is the feeling of freedom, of pushing the limits, of challenging the mind and body. Maggi Voide-Bumann did not set out to climb all of the Alps’ four-thousanders, yet one day, she had done it. Born in Saas-Fee, she was, in fact, the first woman to conquer them all. But it was never about the achievement or recognition: “Bagging a four-thousander can be a battle, you need to know your limits. But when you stand on the summit, the Chrampf (struggle) as we call it in Valais, is compensated by an overwhelming feeling of freedom. The remoteness, the silence, the power of nature. It gets me every time,” she tells me. According to the official Club 4000 list, Maggi Voide-Bumann was the first woman to reach the summits of all 82 four-thousanders and only a select few have repeated the feat since.

A love for the mountains
Maggi Voide-Bumann was born into mountaineering. “When I was 13, I climbed the Allalin with my uncle, Xaver Bumann, who was a mountain
guide. That was my first four thousand metre summit,” Maggi recalls. But it was with her husband Léonce, that she discovered her true passion for mountaineering. It was with him that she climbed all of the 48 four-thousanders in Switzerland. She climbed the remaining 34 peaks, mostly found around Chamonix, with her son, Gabriel, a mountain guide himself. And thus, she became the first woman to stand on top of all 82 four-thousanders. “It’s second nature to be fascinated with the mountains when you grow up in Saas-Fee, seeing incredible peaks like the Alphubel, the Dom and the Südlenz every morning,” she tells me. The 65-yearold has fought her way to most of the summits alongside her son Gabriel, but from time to time the whole family comes along. For Maggi, the most beautiful mountains are her home mountains, the four-thousand-metre summits of the Mischabel range and the Weissmies, her personal favourite. “I’ve climbed that one from all three sides,” she tells me, “the view back towards the towering Mischabel peaks is majestic.” The pensioner also remembers the Rochfortgrat and the Grandes Jorasses, as well as the Aiguilles du Diable, as particularly special. Those climbs, parts of the Mont Blanc massif, were the most challenging for the passionate mountaineer.

An emotional journey
In August 2008, Maggi & Gabriel set off together to bag the final, technically challenging, summits. The final mission, on 10th August, was the ascent of the five jagged peaks of the Aiguilles du Diable. “Looking back at the rocky, knife-edge ridge was unbelievable. I almost couldn’t breathe, and my eyes filled with tears. I was so nervous before setting off in the morning that I felt slightly queasy. But I gathered my courage and a few hours later I was standing on the first, then second, third, fourth and finally the fifth peak, L’Isolée,” recalls the alpinist.

“Bagging a four-thousander can be a battle, you need to know your limits. But when you stand on the summit, the Chrampf (struggle), as we call it in Valais, is compensated by an overwhelming feeling of freedom. The remoteness, the silence, the power of nature. It gets me every time.”

A dream come true
Maggi’s long-standing dream of traversing the Mischabel ridge came true for this conqueror of mountains in the Summer of 2012, again with her son. “We set out from Mittelallain to Feejoch, and then to the Mischabel Bivouac via the Alphubel. We bedded down there for a bit, but set off at 1.30 am, summiting the Täschhorn first, then the Dom, the Lenspitze and finally, the Nadelhorn,” she tells me in our interview on her terrace, overlooking those same mountains. “By 3 pm, we had reached the Mischabelhütte and descended back to Saas-Fee with smiles on our faces,” she continues. Today Maggi Voide-Bumann has taken a step back: such adventures are a thing of the past. “But I still love the outdoors,” she says, “I still enjoy easier hikes with my husband Léonce. Although, some of them are still pretty demanding.”

“It’s second nature to be fascinated with the mountains when you grow up in Saas-Fee, seeing incredible peaks like the Alphubel, the Dom and the Südlenz every morning.”