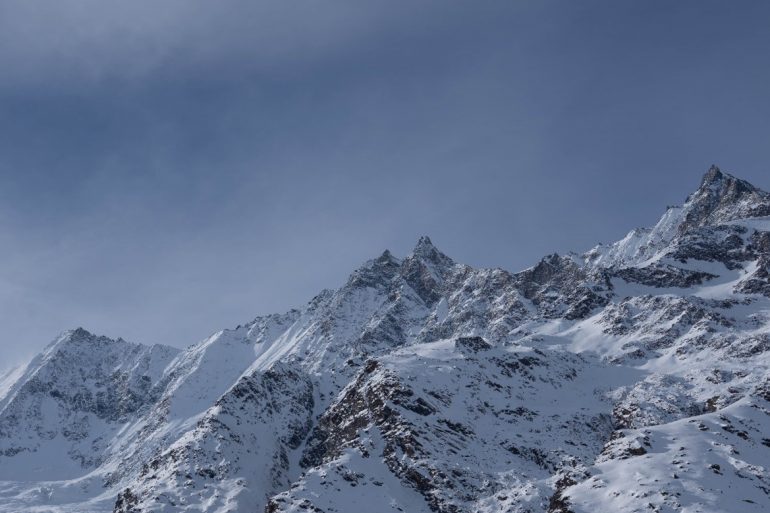 The Saas Valley and its mountains. They are gigantic, humbling us all and often rendering us speechless. There are eighteen four-thousand-metre peaks in the Saas-Fee/Saas Valley tourist region. Here are some tales of this impressive mountainous world.

The four-thousanders. They are a symbol of the magic of the Saas Valley. And they are our figureheads.

People were already drawn to the landscape of the Saas Valley as early as the end of the 18th century and beginning of the 19th: from travel writers to cartographers, mineralogists, botanists and landscape painters. Through their writings and drawings, they made the valley widely known, and soon tourists began to arrive.

While the mountains of the Saas Valley have stood in place for thousands of years, they have not lost any of their attraction. It’s not a feeling that comes from just anywhere – it’s simply the feeling of connection to Mother Nature. The mountains exude majestic strength and beauty. However, they also bring a sense of calm, because no matter whether the sun is shining, or it’s stormy or snowing, they stand there – ready to withstand life on earth and everything that comes with it. And that force is shared with all of us who love the mountains.

The King of Kings
The Mischabel Massif stretches between Mattertal in the west and the Saas Valley in the east. Featuring the Täschhorn, the Dom and the Lenzspitze, it is the third-highest mountain massif in the Alps. The origin of the name Mischabel is still unknown. There are a number of theories. One theory is that it comes from the Swiss German word for pitchfork, ‘Mischtgabla’. Another theory goes back to the year 900, when Saracens invaded the Valais and called the mountains ‘Mudjabal’. This is Arabic for mountain range.

4545. This number is well-known in the Saas Valley. When people talk about 4545 metres in altitude, it’s immediately clear that they’re talking about the highest mountain with its entire base within Switzerland’s borders. It was named by Joseph Anton Berchtold, the canon of Sitten. He went to the Mischabel Massif in 1833 to carry out surveying work and christened the mountain at its centre Dom (German for ‘cathedral’). Twenty-five years after being named, Switzerland’s highest mountain was climbed for the first time. On 11 September 1858, J. Llewellyn Davies, Johann Zumtaugwald, Johann Kronig and Hieronymous Brantschen climbed the four-thousand-metre peak from the north-west ridge.

As well as the main peak, the Dom, and the Täschhorn and Lenzspitze (also known as Südlenz), there are four other four-thousand-metre peaks: the Nadelhorn, the Stecknadelhorn, the Hohberghorn and the Dürrenhorn. These mountains also belong to the Mischabel Massif.

Saas-Fee’s resident mountain
One of the most famous and probably the most distinctive mountain is the Allalin. In Saas-Fee, the locals like to refer to this mountain as their resident mountain. At 4027 metres high, it is one of the easiest and most-climbed four-thousand-metre peaks in the Alps. One of the reasons for this is that the Metro Alpin funicular railway takes you up to about 570 metres to the summit. From Mittelallalin, you can reach the summit in about two hours. The origin of the name of the Allalin is also interesting. There is also a Saracen theory here, proposed by Christian Moritz Engelhardt in 1840, who believed that the Saas Valley was inhabited by people of Arab origin in the 10th century. Engelhardt said the name comes from Alalain and can be traced back to the Arabic ‘ala’i-ain’, meaning spring (‘spring horn’ – ‘Quellhorn’ in German). The Allalin was first climbed on 28 August 1856, when Franz Josef Andenmatten and a guide from the Imseng family led Englishman Edward Levi Ames to the summit. In good weather and with a mountain guide, you can climb the Allalinhorn relatively ‘easily’ with a bit of stamina and good footing by taking advantage of our package ‘My first four-thousand-metre peak’.

At the summit, a panorama awaits with fantastic views of the Mischabel Massif to the northwest, the four-thousand-metre peaks of Rimpfischhorn and Strahlhorn to the south and the famous Alphubel. In winter, it is particularly popular with many mountaineers for ski touring. Skiing down the mountain is an exhilarating experience.

Eager to join the four-thousand-metre peaks
Not to be forgotten in the imposing Saas mountain landscape are the two southeastern four-thousand-metre peaks: the Weissmies and the Lagginhorn. The 4023-metre-high Weissmies is known for its different faces. The north-west face is covered in ice, while the south face is mostly free of snow. The Weissmies was first climbed at almost the same time as the Allalinhorn. At the end of August 1856, Peter Joseph Zurbriggen and the Zurich geologist Jakob Christian Heusser summited via the southeast ridge.

And finally, there is the Fletschhorn. This mountain made it into the international press. In 1900, the Fletschhorn was still part of the four-thousand-metre family. But erosion, melting ice caps and more accurate measuring methods have all contributed to its height decreasing. In the 1950s, the Fletschhorn lost its status as a four-thousand-metre peak. In 1988, the Saas-Grund municipality set out to restore the mountain to its original height. They intended to restore the Fletschhorn to its original height of 4001 metres by building a dry stone wall from rocks on the mountain. Very few people were enthusiastic about the idea and in October 1990 the planning application was rejected by the Valais canton.

Today, the Fletschhorn measures exactly 3986 metres and is therefore just 14 metres short of the four-thousand-metre mark. The story was memorialised in international media coverage. Newspapers from all over the world reported on the Saas-Grund municipality’s project for the Fletschhorn.