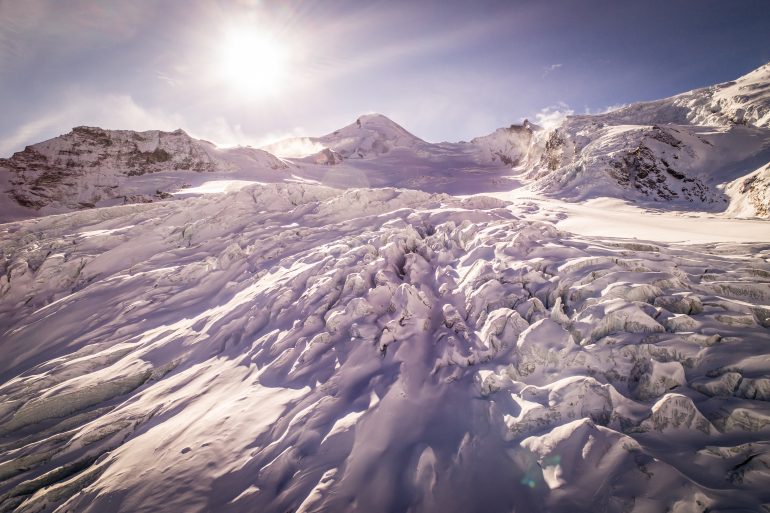 Guardian of the glacier

Glaciologist Felix Keller is determined to save our glaciers. It might be an ambitious plan, but he believes it is possible.

When Felix Keller talks about his plan, his eyes light up, bright and blue like the glacier. Blue and white have always been his favourite colours. The 56-year-old naturalist and glaciologist has a mission: to protect the Morteratsch Glacier in Sedrun from complete melting. Although in his words, “it’s not so much about the glaciers themselves, rather the water locked up within them.”

In Switzerland, 57 billion cubic metres of water are stored as ice in its glaciers. And that water is valuable. As the glaciers shrink, rivers will run lower and lower each year. At present, if the rains fail in summer, glacial melt prevents the rivers in the valley from drying up. But once the glaciers are gone, the water supply as we know it today will cease to function.

Two years ago, Felix Keller was having lunch with his then supervisor at the Academia Engiadina educational institution in Samedan. “If you were of any value as a glaciologist, you ought to save the Morteratsch Glacier,” his supervisor teased. “Forget it, there’s no way that would work!” was Keller‘s answer at the time. But he couldn’t get the idea of saving the glacier out of his head. The very next day while fishing in a wild stream, he began to think through the possibilities and impossibilities of such an ambitious project. Glass, metal, plastic and paper – they all get recycled in this day and age, he thought. So why not the glacial meltwater?

After days of thinking over the facts and turning them over in his head time and time again, Keller couldn’t find any good grounds on which to say they wouldn’t be able to successfully rescue the glacier. So the project was born. The question he found himself asking was: “Should we try to preserve glaciers as freshwater storage for future generations?”

Keller presented his idea to friend and fellow glaciologist Hans Oerlemans from the University of Utrecht. A series of measurements taken by this university since 1994 makes the Morteratsch Glacier the world‘s best-studied glacier in terms of energy balance. Interestingly, Oerlemans, unlike Keller, believed the plan to be quite feasible. He suggested they could test the theory by spreading snow produced from the glacier’s meltwater over part of the glacier itself to protect it from solar radiation.

The projections that followed the experiment were surprising. If just 10 percent of the glacier‘s surface could be kept snow-capped during the summer, the glacier would potentially start growing again within ten years. That would be a dramatic turnaround. But the numbers in question were enormous. One million square metres of glacier would have to be covered with metres of snow. That meant the project would require 30,000 tonnes of snow to be produced. 30,000 tonnes for each day of the short weather window between winter and early summer! It would need to be done in the high mountains and, if possible, without the use of electricity. Confronted with such a mammoth task, Keller faced sleepless nights once again.

“If just 10 percent of the glacier’s surface could be kept snow-capped during the summer, the glacier would potentially start growing again within ten years.”

A passionate violinist, Keller spends half an hour each morning practising. “My daily violin playing opens up my mind,” he says. Keller relies on his morning routine to come up with new ideas and solutions. One example is his plan to produce snow using a ‘Schneelanze’ type snow cannon; it is patented in Switzerland and works without electricity. It should be possible to spread the snow using the cable cars that already run over the glacier. Soon, they hope that funding options will open up, and a working prototype for the project will be built in cooperation with industrial partners to prove its practical feasibility.

The estimated cost of the whole project over the next 30 years is 100 million Swiss francs. “That’s only a few million francs per year,” explains Keller, “even if it prevents just one river drying out in one of the dry summers we have to come, then it’s a good investment.” He goes one step further: “I recommend that we apply our approach to one glacier in each of the catchment areas supplying the six major rivers in Switzerland as soon as possible.”

Keller says that the most important thing to do, in terms of the bigger picture, is to tackle the root causes of climate change rather than just trying to alleviate the symptoms. “I hope that this project will convince people that sustainable policies are required to prevent climate change. And that the enactment of those policies is not just seen as a necessary evil, but that they become part of a broader trend in which we’re all inspired to take action, including on an individual level.”

Felix Keller‘s enthusiasm for his glacier preservation project and for tackling environmental issues is contagious. Keller is active in raising awareness of climate change and campaigning for something to be done. Last year he organized a concert on the Pers Glacier, inviting media and the public to see the effects of climate change firsthand. He’s an ambassador for the international “I AM PRO SNOW” campaign, which motivates winter sports resorts, enthusiasts and brands to switch to renewable energy for the sake of preserving the climate and snow they rely on.

Keller is also concerned by similar water and glacier problems in the Himalayas, and he wants to help find a solution. He’s already made contact and started making progress. The award-winning idea of building ice stupas comes from the Himalayas. These are meltwater reservoirs in the form of huge pyramids of ice, often 20 or even 30 metres high. Built in the winter months, the meltwater from these stupas helps to maintain field irrigation even through the dry spring months in the mountainous Ladakh region. To raise awareness of the initiative, Keller has recreated ice stupas in somewhat smaller dimensions near the Morteratsch station in Engadine for several years now. Yet despite his efforts, Felix Keller remains humble. He’s aware that ultimately, there is only so much he can do. If the glaciers have any chance of somehow surviving, is not up to him alone.