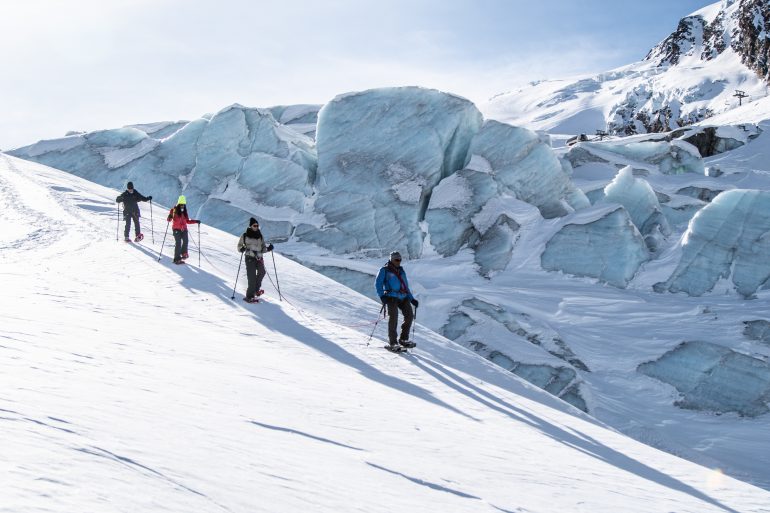 The Saas Valley mountains offer a rare opportunity to get close to glaciers. A guided mountain tour on the Fee Glacier is the perfect way to get even closer.

Snow crunches under our snowshoes. From a distance, we are but specks on the huge field of white that is the Fee Glacier. Precipitous walls of ice tower overhead, shimmering like giant sapphires.

The glaciers have been a big part of life in the Saas Valley for centuries. Back in the 1930s, schoolchildren would hack off chunks of our ice giants to take back to the village in wicker baskets and sell to the local hotels to keep things cool. Eventually, though, electricity and refrigerators made this practice redundant. Every summer, shepherds redirected the glacial meltwater to their pastures. Such artificial flooding kept the meadows green and the soil fertile, thanks to the nutrient-rich sediments the meltwater transports.

Unending fascination
For the glaciers, winter is a time of rest and recovery. The meltwater that flows down from the valley via the Vispa and Rhone rivers to the Mediterranean stops flowing. Meanwhile, the snow builds up, metres deep under our snowshoes. And just as energy bars keep us going on a tour of the glacier, snow re-energizes and replenishes the glacier. Locals and guests alike remain unwaveringly fascinated with the ice world, year-round. Luckily for many, the ski slopes on the Fee Glacier remain open almost all year. As a result, Saas-Fee is one of the most important summer training bases in the world for winter sports professionals.

A victim of climate change
Our glacier tour takes us to the quieter parts of the glacier, away from the pistes and the usual hustle and bustle of aprés ski which is already well underway in the village below. The only sounds we can hear are our footsteps and the rhythm of our own breathing. It’s an oasis of calm at the foot of the Mischabel chain. But despite the silence, the Längfluh mountain restaurant is in sight. There, we’ll enjoy a generous Walliserteller (a selection of Valais specialities) and a refreshing glass of white wine.

They’re a way of life, a vital resource, and so much more. Beyond being the much-loved subject of many a tourist’s photo, these ice giants are an indicator that our planet is warming, and fast. In the 1860s the Fee Glacier reached down into the valley, where the Felskinn cable car station sits today. Since then, the ice sheet has been disappearing. The worldwide retreat of glaciers has been accelerating in recent years. In fact, ETH Zurich‘s measurements show that during just a few weeks of the hot summers of 2017 and 2018, Swiss glaciers lost as much as two to three percent of their remaining mass.

After a short rest, we resume our trek. A thunderous roar in the distance pierces the silence. An avalanche has been triggered by the fierce midday sun. The tumbling snow plunges down the cliffs of the Täschhorn, coming to a halt on the upper slopes of the glacier. That will nourish the glacier during the draining summer months.

A formative experience
The ice on the Fee Glacier is still up to 80 metres thick. It’s one of those places you can truly feel the power of nature. Mountain guides offer guided tours over the ice year-round. The starting point for these glacier explorations is at the Längfluh mountain station. And thanks to the new gondola, it only takes about 20 minutes to reach the 2,800-metre-high station from the village. Just a few metres after setting off from that point, you leave the prepared ski slopes behind. The tour leads between glistening columns of ice and over crevasses which must be carefully navigated. Many of these crevasses are more than 20 metres deep, and often, you need a trained eye to even know they’re there. This route is far too dangerous to attempt without a mountain guide.

The entire group is roped together via harnesses, with the guide in the lead. Like a colourful pearl necklace, we navigate the crevasses as one. Later, at home, we spot ourselves in the images captured by Längfluh webcam. Thanks to the experience of today’s mountain guides, this trip over the Fee Glacier is accessible even for those without any prior experience. Nevertheless, the tour, which lasts approximately two hours, does require a good level of physical fitness.

The glacier is constantly moving. It flows slowly but steadily downwards towards the valley. The friction that results from the ice’s movement over the rocky mountainside distorts these powerful rivers of ice, birthing deep crevasses and giant ice towers. Rarely does one feel as small as when travelling through this bizarre ice world. One thing is for sure, a journey over the Fee Glacier is an experience you’ll never forget.