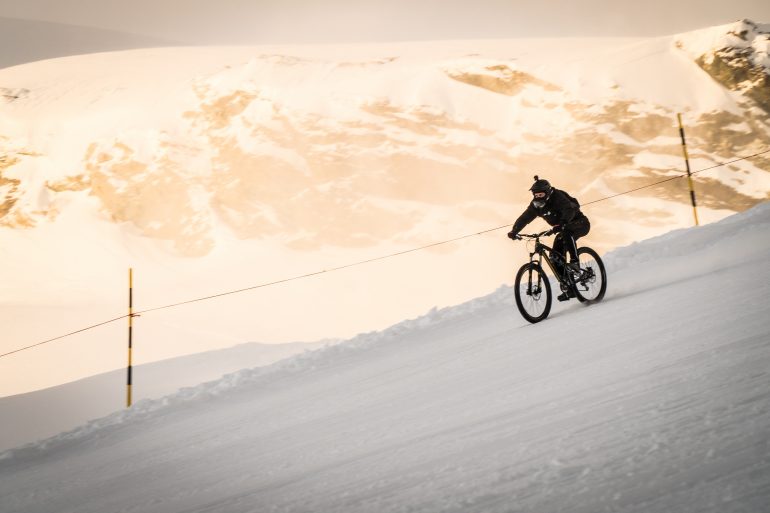 140 kilometres per hour on ice and snow

When the starting pistol sounds for the Glacier Bike Downhill, more than 200 people jump on their bicycles and tackle the ski slopes from Mittelallalin to Saas-Fee. Mountain bike guide Kyle Harris explains.

“Before the starting pistol fires, a deathly quiet reigns. Nobody moves. The only sound is the icy wind swirling around us and the thumping of my own heart. The atmosphere is electric as we wait for the moment. The Mischabel chain looms overhead, the course we are about to descend veering round to the right beneath her. A mixture of fear, excitement and anticipation hangs in the air.

Then the gunshot rings out and everything changes in an instant. The charge to our bikes begins, every one of us howling and shouting like warriors entering the fray. But the chaos around me fades into the background. I’m in race-mode, it’s just me and the bike. Within seconds of the start, one rider is catapulted over his handlebars right in front of me. In my periphery, I can see dozens of crashes and I’m thinking: “If so many riders are crashing at this point, what about further down? What about when we’re charging down the red run at upwards of a hundred kilometres an hour on ice and snow?”

My first Glacier Bike Downhill experience
Kyle Harris, 27, took part in the race for the first time two years ago. He’s been riding mountain bikes since he was just eight years old and has been racing for the past six. But a downhill race on snow and ice was a totally different prospect. In the Glacier Bike Downhill, participants race over glaciers and snow from Mittelallalin at 3,500 metres down to Saas-Fee, reaching speeds up to 140 kilometres per hour. The record time for completing the 8.4-kilometre-long downhill is an impressive 7.1 minutes.

All the riders start the race simultaneously but in three waves, with a safe distance between them to minimize the risk of crashes. “I was nervous, for sure. I love to ride fast and have a lot of experience on bikes. But I had no idea how to control one at up to 140 kilometres per hour – and on snow,” says Kyle, remembering his first experience. Although the racers can do a practice run the day before the race, the real thing is never quite the same. “I had certainly never ridden my bike straight down the fall line on a ski run before – practice day was my very first time. But it went ok. I‘m a pretty good mountain biker, I can pretty much ride anything, on normal dirt at least. I figured that with my experience I’d be able to handle the snow fine,” he explains.

For three years now, Kyle has been a mountain bike guide in Saas-Fee. That means that in the summer, at least, he’s on his bike practically daily. “With a few turns of the test run, I picked up ‘the basics‘ pretty quickly, learning what you need to do to ride on snow. Turning is pretty different from normal, you have to position your body weight properly for it to work. And you can’t use the front brake as much as you normally would either, else you lose control. You have to tilt your bike slightly and use your feet to drift around corners. It‘s not easy. And I didn’t have it totally dialled down after practice either, I crashed pretty hard in the last race,” laughs Kyle.

“It’s a feeling unlike any other, a real adrenaline rush.”

Riding down red runs
In spite of everything, he was raring to go again last year but unfortunately, the race had to be cancelled at the last minute because of heavy snowfall on race day. The Glacier Bike Downhill is dangerous, but not always, says Kyle. “If you ride fast like me, you can crash hard – it’s true. I did, three times, and the last one was a big one. I was turning hard and slid out. I took out a crash barrier… with my head. Luckily I had a helmet on. After that, I was pretty slow to the finish, it was too much for me, “he confesses. But in spite of the big crash and last year’s cancellation, he’s looking forward to the next race in March. “It‘s just unbelievably fun, and even for experienced bikers like me it‘s a challenge – that‘s the attraction. Where else could you bike on red runs, snow, and ice? It’s a feeling like none other, a real adrenaline rush.”

Tires and tire pressure
For those who want to race, but have little experience or have never ridden on snow, Kyle advises you practise on a beginner‘s slope or a small hill. Above all, it’s crucial to learn how to brake and how to turn, because both are pretty different from normal riding. “It’s also important that riders know what kind of tires they need and what tire pressure works best. And of course, to make sure you have protective gear like pads and a helmet. The key is to stick to speed you’re comfortable with, and don’t try to exceed your own riding skills. If you do that, you can’t go wrong,” says Kyle.