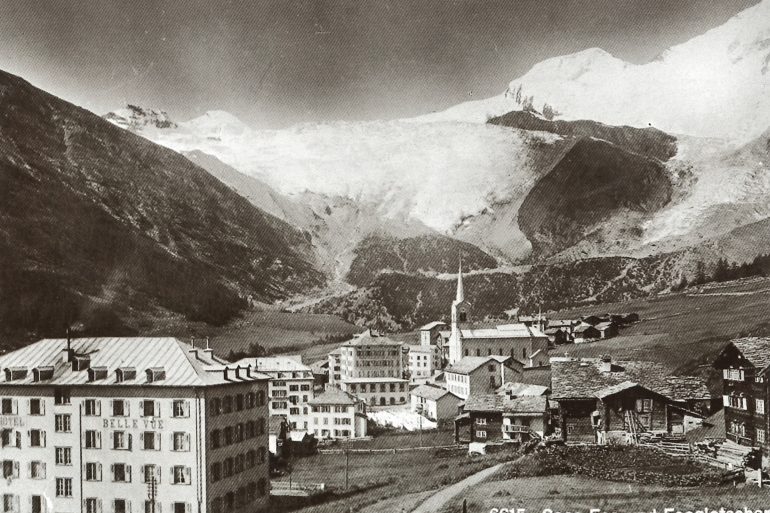 A new chapter in an eventful story

The Walliserhof Grand-Hotel & Spa celebrates its reopening in December 2019. This is a glimpse at the storied history of one of Saas-Fee’s iconic establishments.

She frantically tightens her bright, chiffon sarong around her hips and adjusts her beach hat. Then she wipes a bead of sweat from her lip, takes a deep breath, and plunges back into the Walliserhof events hall, a tray full of cocktails in one hand. It’s the late 80s and a well-known private bank from Geneva is throwing its staff party at the exclusive five-star hotel. Former hotel manager Beat Anthamatten has put on a luxurious beach-themed party, complete with sand, a colourful sea of umbrellas, and waiting staff decked out in beachwear. The party went down in legend and is still talked about in the village today.

Bill Murray and co.
It was, however, just one of many. The Walliserhof was known for hosting the most extravagant events and illustrious guests. Barons, politicians, actors and singers streamed through its doors, often partying until the early hours in its club, Le Dancing. At the height of its fame, a simple glass of mineral water cost an immodest 12 francs. TV shows were filmed there, fashion shows were hosted, even Hollywood dropped in. Part of the Bill Murray movie “The Razor‘s Edge” was filmed at the hotel. Thanks to a spate of food poisoning in India, where they had been shooting scenes in the Himalayas, the whole crew had to leave prematurely. They landed on Saas-Fee as the stand-in. And so, approximately 45 members of the cast and crew stayed in the Walliserhof for three weeks. During which time, Bill Murray felt so at home that he even played a DJ set in Le Dancing.

The new concept: holistic recovery
From December 2019, a new chapter in the eventful history of the hotel begins. With new investors came a new hotel director. And he brought with him a new vision. The exquisite brochure of the new Walliserhof calls the hotel “your alpine retreat for body, mind, and soul,” going on to say that through relaxation, activities, and gastronomy, they aim to “take care of your holistic well-being.” Hotel director Thorsten Fink explains: “At our hotel, we aim to help guests to recover from the stresses of daily life. We cater for those who have busy working lives and might struggle to find time for healthy eating, sports, or spending quality time with their families. We put together a complete programme for our guests, promoting active and sustainable recovery,” says Fink.

It all began in 1883 as Grand Hotel Belle Vue
The Walliserhof started life in 1883 as the Grand Hotel Belle Vue, only the second hotel to be built in Saas-Fee. In 1951 it was renamed Hotel Walliserhof. But in May 1976, a catastrophic fire burnt the old hotel to the ground, and in 1978, the property was acquired by the Anthamatten family, namely brothers Erwin and Albert Anthamatten. The hotel was rebuilt and finally reopened in 1983. Albert‘s son, Beat Anthamatten and his wife Chantal ran the hotel for more than 30 glorious years, operating in recent years, under the name Ferienart Resort and Spa. Now, the couple has finally retired from the hotel, and this winter it celebrates its reopening as the Walliserhof Grand Hotel and Spa.

Fink, the hotel’s new director, knows and appreciates hotel’s long history, and its importance to the village. But he wants to shift the focus: “I don’t see myself as the director of a business in isolation, but rather as part of a whole destination. It‘s not just about me and my team, or even the Walliserhof. It‘s about Saas-Fee – the whole town succeeds together!”

CrossFit box and more
The new Walliserhof will be a boon for the whole town, not just its guests. The fitness and spa area has been doubled in size. The gym is fitted with the latest equipment, including a CrossFit box – the first in a 5-star hotel in Switzerland. The whole wellness area totals more than 2,000 square metres – it’s on a whole new scale for Saas-Fee. Fink says the facilities are not only aimed at visiting sports teams, but also a great opportunity for locals. “If you are serious about sport,” he continues, “this is the perfect place to train.“

The refurbishment has left practically no stone unturned, and the whole building now shines with new splendour. However, there are one or two things that have been left untouched, for the better. The exceptional hospitality will, of course, remain a cornerstone. As will its renowned restaurant, Caesar Ritz. Many of the Ferienart’s employees too have been carried over, so regulars will be sure to see some familiar faces.