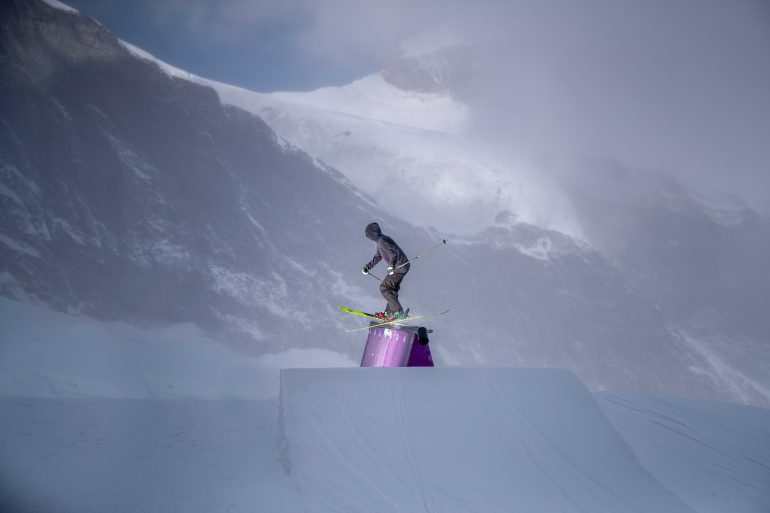 Every autumn, the world’s leading freeski and snowboard stars paint an ephemeral dance of freedom in the skies above Saas-Fee. The Stomping Grounds founder Charles Beckinsale tells us more.

Saas-Fee is a quiet place. Unhurried – idyllic, even. In summer and early autumn, it’s mostly seniors, families and 35 plus-ers strolling through the streets, hiking through the surrounding woods and filling up sun terraces. Then all of a sudden, come early October, the village transforms. Hundreds of young skiers and snowboarders arrive, bringing trendy clothes and a lively atmosphere. Overnight, the cosy mountain village turns into a mecca for the world‘s coolest snowsports athletes.

Beckinsale’s path to the glacier camp
Behind all of this is an Australian called Charles Beckinsale. The 34-year-old is the director and founder of Stomping Grounds, a high-performance training camp for competitive slopestyle, big air, and halfpipe ski and snowboarders. It’s held on the Fee glacier every autumn and offers training opportunities for 10 Olympic disciplines. Last year, 27 out of the 30 Olympic champions from the Pyeongchang Games had been in training at the Stomping Grounds park in Saas-Fee.

Beckinsale has been building parks and slopestyle courses for major events and national team training camps around the world for nearly 20 years now. Wherever he builds snow parks, the global freestyle elite flocks. His portfolio includes premium projects with Nike, Red Bull, and Snowboarder Mag. When it comes to park-building, he is one of the best.

A few years ago, Charles had been finding travelling the world building courses too much, he explains over a cappuccino. So, he started looking at how much it was costing the teams to have him build their own private setups and wondered if it wouldn’t make more sense to get everyone together to train. And – he figured – if pooled together, the cumulated budget would allow us to build something even more spectacular, and reduce costs at the same time. After much research, he decided that Saas-Fee offered the best conditions for hosting this kind of event during the autumn. “The biggest reason for selecting Saas-Fee was certainly the sheer size and depth of the glacier and snowpack we have to work with up there. Another reason was how laid back the village is,” Charles says. “Being able to catch a train and a bus from an international airport to a car-free village where everything is within walking distance really takes away the stress of getting to the mountain each day.” He pauses for a moment, then adds: “Saas-Fee can be a challenging place because of the altitude, the gnarly glacier, and the sometimes unpredictable weather… Nature is truly in control up there! But everyone loves coming here and we couldn’t think of a better location.”

“My mission is to offer the best park and pipe in the world.”

The team behind the scenes
Charles started The Stomping Grounds along with Americans Brandon Dodds and Jeremy Carpenter. Together, they built the inaugural Stomping Grounds park in Saas-Fee in 2016, and the event has grown every year since. “In our first year, we started out just hosting slopestyle and big air athletes, about 60 in total over one session,” he explains. “After a successful first year we had a lot more interest, so we expanded into two sessions and added a halfpipe session. We have also been designing and funding new rails for our sessions each year,” Charles continues. “This year, we have been working on an exciting new layout for the summer park and for our sessions in autumn with the local team including Stefan Plattner and Marcel Brünisholz. Marcel and Stefan had some great ideas, including a big change in the blueprint of the park. Plus, we will have new rails again and were completely rebuilding the pro-line as well as the halfpipe. We’re working hard to get the park ready for the world’s best to train, and to keep it interesting for all the riders, many of whom have returned each year since our very first session,” he explains.

The best park for the biggest stars
When asked what The Stomping Grounds means to him personally, he answers: “My mission remains the same as when I first started: to keep offering the best possible parks and pipes in the world. To keep hosting the very best athletes while they train. As someone who has worked for others year-round in the resort industry between Australia, Canada, and the US from the age of 16, it means the world to me to actually have creative control over projects like this one, and to work with my friends. Being able to earn a living while chasing your passion isn’t all that common these days, so I certainly feel blessed,” he beams. Who are you expecting this year? “A lot of the same teams and athletes as we saw over the last few years. Some of the bigger names already confirmed include the likes of Anna Gasser, Mark Mcmorris, Red Gerard, Chloe Kim, Oystein Braaten, and Stale Sandbech… to name a few,” he says with a wink.

The first Stomping Grounds session starts on 5th October, the second on 17th October. Besides training sessions on the glacier, movie nights and a few parties are in the works, Charles says. “But really, the athletes just kick back and enjoy seeing each other.” What does his clientele enjoy most about being here? “It’s a combination of the pristine park and pipe offering at a time of year when not much else is open. The vibe up there is electric on those sunny days, when the world’s best come together and push each other to new heights. And of course, they love the relaxed downtime in the village, where the athletes soak up the local hospitality and the incredible beauty of the Swiss alps that surround the village,” he sums up.

“The world’s best are pushing each other to new heights.”